Parallel Challenges for Automakers and the Building Industry

By Beverly and Steve Smirnis

They’ve been through high highs and low lows and had to reinvent themselves to survive.  It’s a different type of worker that will be considered paramount to delivering the product in the future.  Collaboration is key to survival.  Change is inevitable and now is the time to prepare.  Here, we’re talking the same issues but a different industry.  This is not the first time that we have seen many parallels between the home building industry and the automotive industry.  Let’s look at the history and future of Volkswagen.

The History of the Volkswagen Beetle

Volkswagen started with a rather sorted past with its original roots traced back to 1937 Nazi Germany.  Very few Germans owned cars at the time and the directive was to produce an affordable “people’s car” that could carry two adults and three children at the equivalent of 60 mph.  During World War II, production ceased after only a few cars were completed.  The vehicle plant was ordered to be dismantled as part of war reparations, but a British officer persuaded his commanders about the potential of the car which would become the VW Beetle.

We’ll await the final version of the new LEAF protype and those Volkswagen I.D. EVs, and hope our confidence in EVs will be re-instilled.

In 1998, Volkswagen rolled out the new Beetle.   After 80 years, VW just stopped making the iconic Beetle last month after offering two special editions–the Final Edition SE (our tester) and the Final Edition SEL.  We found it fun to drive and found it surprisingly quiet even though it was a convertible.  It rides and tracks like a much larger vehicle and is very stable even at highway speeds due to its wider stance.  The absence of the flower vase among other fine-tuned details make it more masculine than previous models.  It’s sure to be a great collectors’ item, even if this is not actually the final Final Beetle.

What Remains of Volkswagen Now?

So what remains?  The VW Golf hatchback is offered in several iterations including an e-Golf.  There’s also a Golf SportWagen.  The VW Passat is available as a sedan and a wagon, while the compact Jetta is offered only as a sedan; a Jetta hybrid was discontinued in 2016 and a Jetta SportWagen was pulled from the lineup in 2014. The Passat mid-size sedan has been redesigned with a 2020 model recently introduced.  Volkswagen is calling its brand new longer and wider Arteon its flagship sedan.

Is the VW brand going to meet Volkswagen Group’s stated goals for the future?  After admitting in 2015 to cheating on emissions tests in the U.S. by outfitting some VW cars sold in America with devices on diesel engines that could detect when they were being tested and change the performance accordingly to improve results, Volkswagen admitted that the market for diesel vehicles was nil.  The execs have stated that they expect cars with internal combustion engines will not be available in key markets such as Europe, China and the U.S. after 2040.  They also fessed up to the fact that VW had slept through a few trends, especially the SUV boom.  Accordingly, they promised to roll out more SUVs and put a major focus on EVs.

CEO Herbert Diess talks of an electric car strategy that will go after Tesla’s market share, projecting sales of up to 22 million Volkswagen EVs by 2028.   It’s important to note that if the EV projections are achieved, most feel other brands that are part of the Volkswagen Group will play a bigger role; Audi is showing early progress.  But the execs are still saying the VW brand alone aims to build more than 20 EV models on the group’s electric vehicles platform. In 2020, the German automaker will begin selling its I.D. EVs; the VW brand lineup promises a Tesla Model S-rivaling sedan, several crossovers, a hatchback, and a reborn Microbus.  While the automaker warned it would cut jobs as it speeds up the rollout of electric cars because they are less complex to build and require fewer workers, an EV evolution was not seen as positive when Volkswagen cut 7,000 jobs last March.

It’s been widely touted that EVs will get bigger and better in 2019 and the average battery range will be greater than 200 miles.  But in our recent test drive with the Nissan LEAF we lost some confidence about the current status of EVs.  Yes, the LEAF was smart looking, acceleration was quick and smooth, and the ride was quiet and comfortable, but careful about those range claims, automakers. The disclaimer is, you’ll only get the touted range if you’re driving on flat terrain at city speed limits.  We found this out the hard way on a road trip to Austin.

Even in a city that mirrors itself after California, it became obvious that our world is also not yet nearly equipped to boost EVs to the mainstream.  Sorry Nissan, we love you, but the LEAF caused too much anxiety.  In its defense, part of the problem were the cumbersome apps needed at various branded charging stations and lack of rapid chargers.  When we managed to get to our destination, we were surprised at the lack of a charging stations at our hotel. 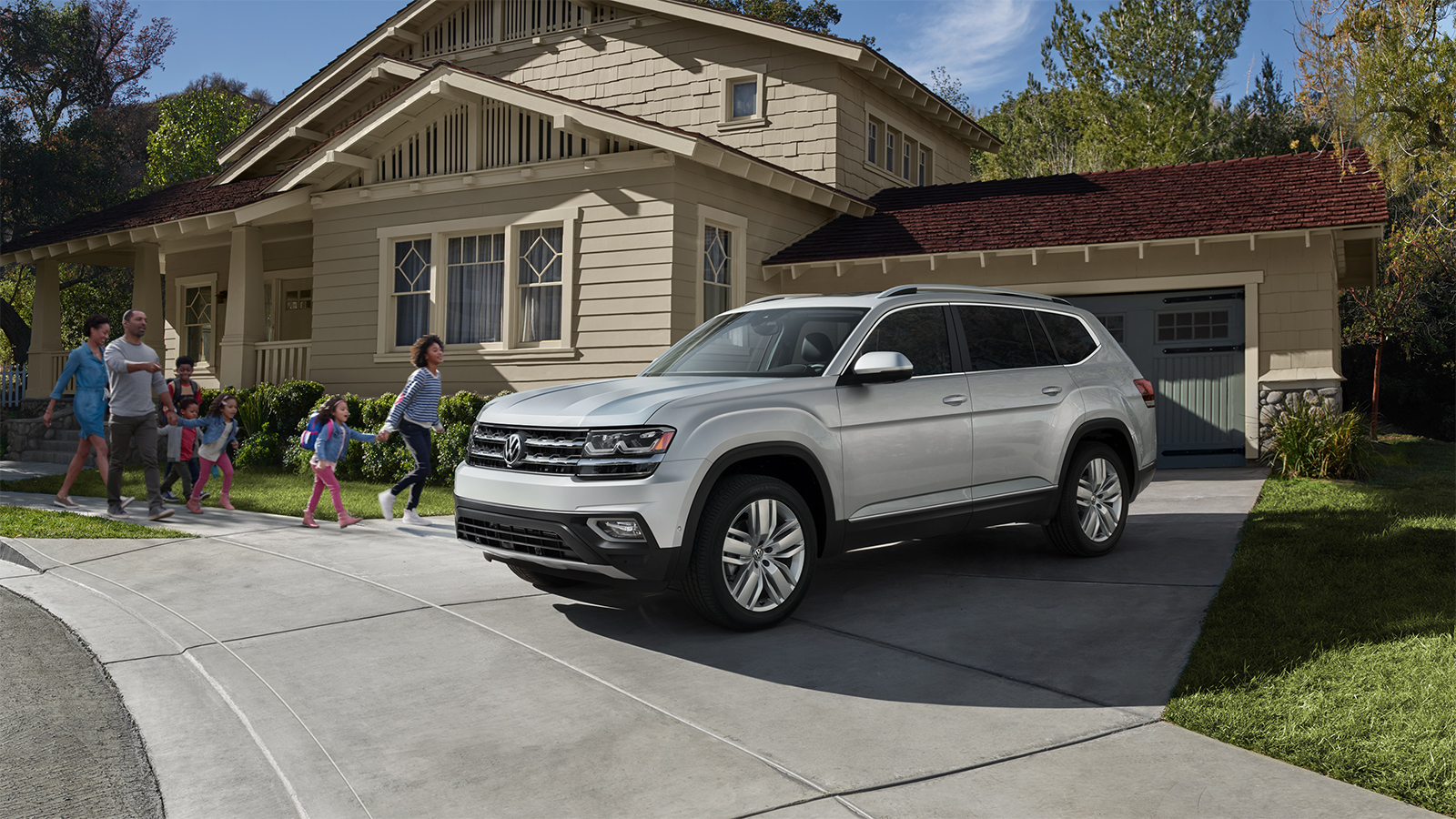 The VW Atlas is a likeable and affordable German-engineered people-mover.

Meanwhile, back to VW on the SUV front, Atlas and Tiguan remain as the VW brand’s sole crossovers; 2017 was the last Touareg model.    We recently drove the Atlas 2.0T S and found it a good-looking, affordable people-mover, surprisingly light and nimble on the road.  Our test model had no added options and came in at about $30,000.  For a large family on a budget, German engineering and a great warranty will continue to garner a market for the Atlas.

A Forbes article noted, “For decades, Volkswagen insisted to tell the market what it needs, instead of developing a feel of what the market wants.”  We hope that the VW brand is serious about change and will continue to watch, adapt and ultimately survive, given its long history and the demonstrated ability to deliver likeable and affordable German-engineered vehicles.

To learn more about What Drives US and new Toys and Trucks auto reviews, sign up here.