Versatile, Rugged and Luxurious, Jeep Moves to Retain Its Share in a Segment Hotspot

Often times, you’ll read about segments of the American car market and how they’re sliced up in this column. You’ll find out who competes with who in the decades-old shooting match between segment leaders and new arrivals looking to stake their claim. The full-sized truck segment of the American market lends itself more to this type of analysis than others.  It is arguably the most competitive and certainly the subject of much study and even more pride.
It’s not due to a lack of willpower, but there is something that trucks don’t do bigger and better than everyone else: sales volume. No, the goliath truck segment comes in second to a wily foe that prefers versatility to brute force….a versatility that no amount of spray-in bed liner can afford its truck and a range of platforms not bound by the words “crew cab” or “extended bed.”  I’m talking about the compact SUV segment that comfortably outsold the truck segment in Q1 of 2017. Moreover, they outsold their own 2016 numbers in Q1 by an astonishing 9%. In light of these numbers, and while FCA Group continues to tout its RAMs, it’s no surprise that the Jeep brand, its own cousin under the FCA umbrella, has a renewed focus on expanding its relative success in the segment. 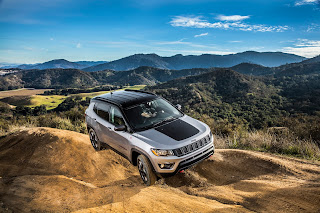 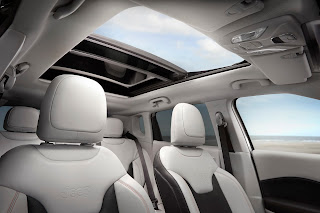 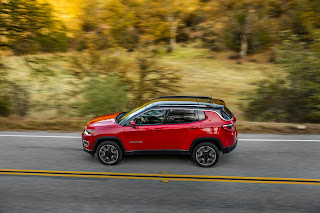 This year, Jeep combines their tradition of rugged appeal with modern touches to create the 2017 Jeep Compass. As Compact SUVs have grown more popular, it’s clear that Jeep seeks to open up this vehicle to a wider range of potential buyers, perhaps attracting graduates of more basic mid-sized vehicles. As tastes become more discerning and focus shifts to premium features, the Compass aims to find that middle ground between compact SUV drivers and would-be luxury car owners. Don’t get me wrong, the Compass maintains its entry-level appeal with base models featuring a back-up camera and phone-syncing 5” touch screen starting at $20,995; but there are two variants of the Compass that exceed the ruthless practicality beloved by compact SUVs—The Jeep Compass Limited and the Jeep Compass Trailhawk.
While these surge past the low $20,000s, it’s easy to see why. Both feature a two-tone paint job with a black roof, giving the Limited and Trailhawk an exclusive aesthetic, especially when paired with the optional 19” Polished Aluminum with black paint accents. Both also feature exclusive interiors:  the Limited with two-tone perforated, ventilated leather and the Trailhawk with red stitching and optional suede. Navigation suites also improve the infotainment on the dash, making room for the 8.4” touch screen and featuring a brand new operating system for Jeep. The operating system is easy to use, easy to sync, and visually appealing with its hexagonal design language. The available panoramic sunroof is hard to describe. It creates an almost ineffable sense of ease when you enter the Jeep Compass. While a sunroof may seem trivial, it adds quality to the vehicle not measured in horsepower or dollars nor even inches of headroom. It creates headspace, a portal to epiphany, freedom of thought and a view of infinity.
The 2017 Jeep Compass aims to go even further beyond segment-defining practicality in pursuit of loftier goals. It exudes spontaneity, it wants to wake us up and revive our sense of adventure. And adventure is exactly what the Trialhawk is designed to do. It has increased ground clearance and underbody skid plates. Unique front and rear facias also improve the Trailhawk’s obstacle approach and departure angles. These features pair with the Selec-Terrain traction control system and Active Drive Low 4×4 System to earn the 2017 Compass Trailhawk best-in-class off-road capability bragging rights.
In true compact SUV form, Jeep has found a way to appeal to nearly everyone, but few do it with the grace of the 2017 Jeep Compass. Its trim levels flow from practical to practically lavish and its premium features are balanced with aesthetic upgrades so they don’t seem out of place. It is also well timed, with its exterior redesign introduced simultaneously with the new infotainment technology. Whether adventure seeker or city dweller, nature dreamer or overland warrior, the Compass is a formidable companion.
Beverly Smirnis2018-12-05T22:40:28-06:00August 23rd, 2017|Tags: BY NICK SMIRNIS, Jeep|