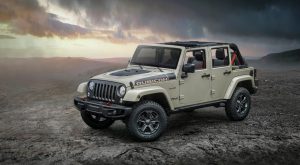 Like most stories both professional and personal, mine begins with an email. Being a relative newcomer to the Texas Auto Writers Association, I had never received one like this before. Every year Fiat Chrysler America (FCA) sends out an email invitation to a veritable open house for automotive industry media that they vaguely call “What’s New?”  In short, they showcase last year’s favorites alongside the next year’s yet-to-be unveiled “embargoed” vehicles, specifically selected to show off differences between sequential model years. By the time you’re reading this the embargo will be up and you will be among the first to know “What’s New?”
But the What’s Newevent at the Chelsea proving grounds raises as many questions as it answers. The so-called open house is a bit of a misnomer because the “house” isn’t really open at all. You get the feeling of being in Jurassic Park at FCA’s Chelsea Proving grounds. Sure, we see a curated selection of ready-for-production vehicles, but lurking behind gates are narrow-eyed security personnel who scrutinize our media badges and then simply point to signs that say “Restricted Access.” It stirred my curiosity and gave the impression that this was a place for more than just building cars.  Were the employees more than mechanics?   Is this where mad scientists discreetly clock in and out in order to fund more dubious future projects?
Yes, it was still a media trip of course. I did lateral load testing on the commercial RAM 3500 with a payload on board, I drag-raced the Hellcat using their refined launch control system, I took the Fiat Spider Abarth around an autocross course with a very liberal Italian translation for traction control (a dangerous button simply labeled “Sport”), and I even took a few vehicles through the Lyman Trail: Jeep’s fabled off-road torture chamber where all those that cross the finish line are designated “Trail Rated.”
But this feeling of only scratching the surface stalked me like a velociraptor as I was carted from location to location past more and more signs and mysterious facilities. Driving through the immense facility, you see a ramp that goes nowhere. You see a shack full of water pumps with a large red valve outside. Next to the valve, a sign says “Danger.” Driving down a quiet side street in the Proving Grounds facility you see a patch of rubber three lanes wide.  Is that the footprint for a beast not yet known to the world, or the site of an after-hours drag racing club between engineers and fabricators?  Drive a little further where the forest breaks, and you’re on a highway overpass on top of a 10-lane mega highway that goes from nowhere to nowhere—just one  foggy forest horizon to another foggy forest horizon. You stop and rub your eyes just to make sure you aren’t dreaming, and at that moment a car emerges from the curved highway’s horizon, covered in camo and arcane patterns to hide its identity. It approaches and you try to make out a figure in the driver’s seat, but see nothing.  It could be that the reflection on the windshield obscured your view, but then that looming thought creeps in: perhaps there was no driver at all!
Unable to investigate, I continued on towards the Lyman trailhead. I was eager to shake off my escort and get out into the forest and mud and away from what felt like a literal concrete jungle…away from the footprints and phantoms so that I could find some peace in Michigan’s wilderness. Being a newbie to the trail, I thought I should set the bar high and find out how the trail defends itself against one of the more purpose-built trail-eaters. So I grabbed the keys to a hard-topped 2018 Jeep Wrangler Rubicon Recon Edition– a vehicle that seemed more suited to invading an island nation than finding serenity in the forests of America’s Great Lakes. Still, it would have to do; and it did in spectacular fashion and surprising comfort; aggressive styling is an understatement. I removed its roof panels before putting to the test the more functional off-road goodies packed into the Rubicon Recon, including the shortened rock rails which allow larger tire diameters. The trail itself is not a scenic getaway and I was not on vacation, but rather on a treacherous winding obstacle course punctuated by mud puddles and tight corners. All of this was a stroll through the park to the Wrangler, but when I took the much longer Ram Power Wagon into the Lyman trail, the trail’s tight corners and steep break-over mounds required some more technical driving.
I did find a good spot to take a break with a bit of elevation.  When I shut the engine off, I heard migratory birds and some buzzing insects. I took a breath and listened closer to hear a skid plate banging against a boulder elsewhere on the trail.  Finally, more silence. Then, remembering my very long ride through the Chelsea Proving Grounds and all the signs and mysterious facilities I had passed by, I heard some noises that seemed much darker…something mean, ready to be unleashed. Hearing a guttural rancor, I knew that I must have wandered close to the beast’s lair. And that sound that I heard that afternoon was none other than the Demon itself. Before I left, I got to see that very special Demon up close.  Yes, the Dodge Challenger SRT Demon lives up to its name. It is the essence of apocalypse, a savage vessel that takes you straight to the heart of American muscle.
A DEMON AND ITS HEART 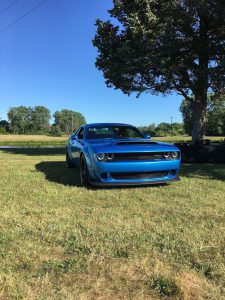 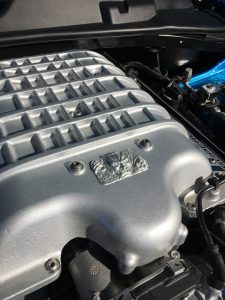