By Nick Smirnis
Sometimes people look for a new vehicle to buy for fun. Sometimes you need a new vehicle because your lease is up or you’re concerned about your car or truck ending its warranty period. But other times, there comes a vehicle that already knows its owner, as if awakening a long-forgotten desire. 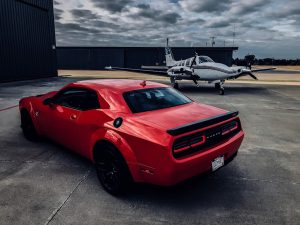 Rationality takes a back seat to destiny when a future Hellcat owner sees one for the first time.  It’s like a childhood dream brought to life and a reminder of simpler times. It brings back the memory of stealing that fiberglass ice chest from your dad’s garage that he ordered from the Sears catalogue with the mail-in rebate. It’s your high school sweetheart parked behind the right field fence, and stealing another kiss before taking to the field for the national anthem.
The Dodge Challenger SRT Hellcat has awakened these feelings since its introduction in 2015, but not until 2018 did its booming voice echo once again with even greater clarity. There was always something a bit too modern to hear the call of nostalgia clearly, a missing stoutness or a slight stylistic flourish that evoked less “revival” and more “reimagine.” But 2018 is the year of the SRT Hellcat. Gone are the days of “resto-mod” chrome in favor of concave “Devil’s rim” wheels that feature a split 5-spoke design and a decidedly racing aesthetic. More importantly is the introduction of the widebody performance package.  I can’t overstate the improvement this brings to the exterior styling of the vehicle.
From 1969 to 1971, the roof of the Dodge Challenger sat just 50.9” from the asphalt, but when the modern iteration was reintroduced in 2008, it had grown nearly 7 inches in height. While the styling and dimensions were truer to its ancestry than its competitors, the standard tire size on large diameter rims joined with a slightly narrower and taller car left the more traditional muscle car owner with just a slightly bitter taste. It just wasn’t quite there yet.  But now, the widebody performance pack smooths out Dodge’s master plan.
The widebody features new, body-integrated fender flares that make room for 11” wide tires.  It adds a completely new Electronic Power Steering system (EPS), and a retuned suspension with 3-mode adaptive damping technology. It also features a new front grille for all Hellcats and raised rear badging to match. When the Hellcat is outfitted with the widebody kit, it’s nearly 3 inches wider than a 1971 Challenger, effectively compensating for its growth spurt in height. A front air splitter adds further stoutness. Not only is the widebody a game changer visually, but the added grip makes for a much more controlled lateral skid pattern meaning more g-force to glue you and your passengers to your seats.
Improved acceleration drops its quarter mile times to just under 11 seconds. However, the added grip doesn’t take any of the spirit out of driving the Hellcat.   Much of the vehicle’s weight still sits close to the front axle so that, in true muscle car form, the back end of the vehicle steps out frequently and makes no apologies for doing so. Wide tires or not, there’s a 707-horsepower supercharged 6.2-liter HEMI® Hellcat V-8 under the hood and all that power goes to the rear wheels.
To move air into the monster, the Hellcat has an unusual intake system that draws RAM-air from a hollowed-out fog lamp which now features a subtle Hellcat logo integrated into the LEDs. The exhaust note growls at low RPM and screams like a banshee on the highway. Also worth mentioning is the particularly modern sound of the sizeable supercharger, which has a discernable whine at lower RPM but ultimately plays a key role in the symphony of automotive frenzy that flows out of the Hellcat. The EPS and adaptive suspension give even more control over your driving modes, which can make the steering heavy or light and even limit the vehicle’s power to 500 hp. Like a jet ski, the Hellcat features a red key and a black(boring) key, which will always limit the power in this way.
Inside, the Hellcat features a range of interior options surrounding the Nappa and Alcantara Hellcat logo seats. Notably, the Harmon Kardon sound system does not leave you wanting, and of course, the Hellcat features creature comforts like Apple Carplay, ventilated seats with lumbar support, and a customizable instrument cluster to go along with the Hellcat trim level.
With all the excitement surrounding the Dodge Challenger SRT Demon, the widebody performance package really is well timed. It has almost all the look of the Demon, but with all-season tires, larger rims, and many of the everyday features that are highly optional on the Demon.  All things considered, the 2018 Dodge Challenger SRT Hellcat Widebody is really all the muscle you want without the drag racing flare and gearhead toolkit. You also won’t have to get on a waitlist to get your hands on one.
For many muscle car enthusiasts that neither race nor change tires like they’re changing clothes, the widebody is the better choice. It is a fantastic toy with many luxury touches and an exterior that is impressive enough to turn heads. The widebody performance package not only differentiates itself outright from R/T Challengers and previous Hellcats, but even goes a little further–as if to reveal just a hint of an exotic car. The Challenger finally glimmers enough to recall those dreams of screaming exhaust and rubber patches in the parking lot, of fresh cut grass and the smell of clutch in the morning. The folks at SRT engineer simple pleasures for complicated times, and this one won’t let you down.
Beverly Smirnis2018-11-14T17:06:57-06:00January 4th, 2018|Tags: BY NICK SMIRNIS, Dodge|