Duking It Out for Truck of Texas Title 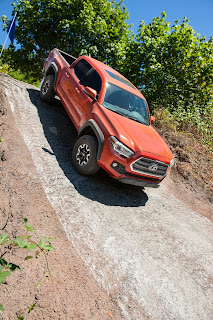 YES IT CAN!  Inspired by desert racing trucks, it has high clearance and a mean looking front end to do the job off-road.    Its 3.5-liter V-6 cranks out 278 hp and 265-lb-feet or torque to two or four wheels via six-speed manual or automatic transmission.  Tacoma buyers are  the type that would consider Crawl Control the height of technology.
Every auto manufacturer on the Knibbe Ranch in San Antonio this October will tell you that their truck is tops in power and control, towing and payload, beefy muscular exterior, refined yet rugged interior, storage and space in the cabin and in the bed, has segment-leading safety features, has the quickest and easiest to operate technology, and the best engine technology with the lowest operating costs.  They will all deserve to brag; this is the Super Bowl of truck competitions.  None would dare show up without their ducks in a row.  The question is, which one will have it all?  Which one will deserve the 2016 Truck of Texas title? That title is the kingpin—as big as, well…Texas, where there are more trucks on the road than anywhere else on earth!
Yeah, there will be some other contenders there vying for coveted titles like SUV of Texas and CUV of Texas.  The Heavy Duties will also be strutting their stuff there.  Toyota’s totally redesigned 2016 Tacoma will beg the question:  Is mid-size the just right size?  This was the year for the big re-do on it, necessitated by competition from Chevrolet’s Colorado and GMC’s Canyon mid-sizers entering the playing field last year.  But the fiercest fight has historically been among the half ton mainstays.
And in this ring will be:
Defending Champion Ford F-150.  Ford unveiled and stole the show at the 2015 North American International Auto Show with the next-generation 2017 Ford F-150 Raptor (available Fall 2016) and may do the same again here.  Powered by an all-new 3.5L EcoBoost® engine, the new Raptor has even more horsepower and torque than the previous 411-horsepower, 434-lb-ft 6.2L V8 in the Raptor.   With high-strength, military-grade, aluminum alloy in its body and bed, it weighs 500 lbs. less than the 2014 Raptor.  Ford is also expected to add a diesel and ten-speed to their aluminum-bodied F150s for 2017 models already rolling out.
Ram 1500 The arch rival continues to move forward with two mid-year 2015 offerings that carry into the 2016 model year – the Ram 1500 Rebel and Ram 1500 Laramie Limited. Ram Truck brand also has taken the Ram Laramie Limited – the benchmark in truck opulence – to an even higher level of sophistication and attention to detail.  Ram Truck invests substantially in its products, infusing them with great looks, refined interiors, durable engines and exclusive features that further enhance their capabilities and have given Ford a run for the title in several recent years.
Nissan Titan  There is much buzz about the debut an optional 5.0-liter Cummins turbodiesel V8 with 555 lb-ft of torque on the redesigned 2016 Nissan Titan pickup truck.  A properly equipped Titan XD can tow more than 12,000 pounds and will have a payload capacity greater than 2,000 pounds, Nissan claims.  The XD is actually a cross between a half ton and a heavy duty, creating a segment of its own.  The Titan will be available in 4×2 and 4×4 drivetrains, and an electronic locking rear differential will be available for trail duty.
Toyota Tundra.  Toyota’s full size 2016 Tundra will tout a brand-new, segment-leading 38-gallon fuel tank option, trailer brake controller standard with the bigger V-8 engine option, bundled blind spot warning and rear cross-traffic alert systems in all the premium-level models…oh, and also the fact that it is assembled in Texas!
GM’s Chevy Silverado and GMC’s Sierra Both 2016 cousins have redesigned front ends.  The Silverado also gains an 8-speed automatic transmission along with compatibility with Apple CarPlay and Android Auto.  Changes in power and other specs on these vehicles are being kept tight-lipped, possibly to surprise the competition at the big event in Texas!
Beverly Smirnis2015-11-08T20:56:00-06:00November 8th, 2015|Tags: Chevrolet, Ford, GM, GMC, Nissan, Ram, Toyota|