The latest iteration of the Audi Q7 is a breath of fresh air for the luxury SUV lineup. The brand’s only 7-passenger model has made real, discernable progress in its segment. The exterior is worlds away from its predecessor, its multimedia interface (MMI) is next generation, and it can be ordered with just about any options imaginable. The inside feels modern and deceptively pared down, swapping a plethora of buttons for capacitive switches, an intuitive round control knob, and a touchpad.  But it still retains a lot buttons if we’re honest. 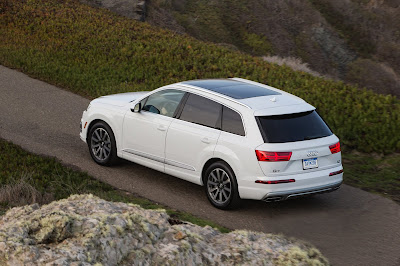 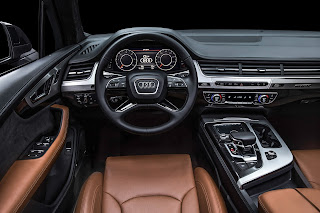 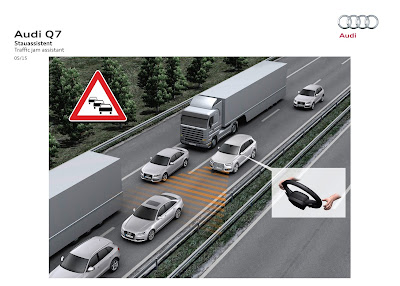 The technology in the 2017 Q7 can seem overwhelming at first. When you start the car, you are greeted by a 12.3″ LCD dashboard called the Virtual Cockpit. It also has an 8″ infotainment display that emerges from the dash and a gear selector that wiggles mysteriously from a single position. And if you can’t actually find the driving position right away, the vehicle may begin to make you feel like you’re wearing an ape suit in a Stanley Kubrick film. You may not know whether to stand in awe, bow down in praise, or swing wildly at your neighbor with a cow femur. And that’s without even a mention of the Driver Assistance suite.
When the options start stacking up, there is a very present learning curve. It may, however, be worth it.  The Q7 can not only adapt its cruise control to the speed of the vehicle in front of you, but also come to a complete stop and resume the speed automatically. As many of you know, this is not exactly brand new technology, but the Q7’s ability to follow the car in front of it, as it avoids a hazard in the road, is. It uses steering overrides developed for Audi Lane Assist to make small adjustments safely while Adaptive Cruise Control (ACC) is active. The corrective steering is made bolder at higher speeds when the vehicle’s confidence is boosted by an optional 4-wheel steering system.
It also has a cluster of tech that Audi calls Pre-sense. It will inform you of potential collisions, measure safe follow distance, flash LED strip lighting red if you open the door into traffic or a sneaky bicyclist. Pre-sense also can be calibrated to warn you if you’re speeding (within a tolerance that you choose). It accomplishes this using Traffic Sign recognition in real time, and in case you missed the sign yourself, it will even project a miniature rendering of the sign onto the windshield via the heads-up display alongside the usual digital speedometer.
Tangibly, there are a few more familiar assistances on the 2017 Audi Q7, such as its Parking System Plus. It doesn’t have the gimmicky self-park features that other brands have played with, but rather focuses on empowering the driver. It has front and rear cameras, front and rear acoustics sensors, and corner cameras that are used to generate the composite “birds eye” camera.
Audi has simplified the engine choice by offering only the Supercharged 6-cylinder 333-horsepower engine titled the 3.0 TFSI, and badged 3.0T. There’s no diesel option in the U.S. yet, due to parent company Volkswagon’s emissions scandal. The 3.0T features a recommended towing capacity of 7700 pounds, but you would need to order a towing hitch package to take advantage of that.
The 2017 Q7 incorporates more high-strength steel and aluminum structural elements, meaning it has shed some weight also. This weight savings no doubt contributes to its snappy 5.7 second 0-60 mph time–a full second faster than the 2017 Chevrolet Tahoe. Furthermore, the engine in the Q7 is mounted lower than in previous generations, meaning better weight distribution, less body roll, and a smoother ride. Any tautness in the Audi platform is alleviated by adding the optional air suspension. This feature really comes to life when using the Audi Mode Drive Select “comfort.” However, at $4000, the air suspension is certainly a luxury.
Speaking of luxury, the interior of the car has a roomy, 7-passenger layout with 35-30-35 individually folding and tumbling back seats. The third row electronically folds flat into the cargo area using switches near the back doors or near the tailgate. The back seat can also be pre-wired for entertainment systems and the inexpensive cold weather package continues the standard front heated seats to the back as well. Ventilated seats in the front are available along with sun-shades and 4-zone climate control as part of the warm weather package. One oversight is the absence of A/C vents in the third row, let alone a dedicated controler. Perhaps 6-zone climate control is on the horizon, but for now, third row passengers will just have to rely on the cabin’s ambient temperature.
Overall, the 2017 Audi Q7 is a worthy update for America’s collection of SUVs and its 7-passenger layout and luxury features make it an enviable passenger hauler. Well equipped models reflect its luxury status, with the middle-of-the-road trim level starting at $58,800. Industry leading technology ensures the brand’s momentum as more Audi models receive the next generation MMI and Virtual Cockpit next year, but the Q7 is a peak at the future of SUVs available today.
Beverly Smirnis2016-12-10T22:36:00-06:00December 10th, 2016|Tags: Audi|