Scientists, Educators, Oystermen, Tour Guides and Outfitters— Personalities as Diverse as the Species in the Estuary

A visit to the Apalachicola National Estuarine Research Reserve (ANERR) Visitors Center, provides an average tourist an insight into the delicate and essential work in preserving one of the most pristine productive estuarine systems in North America known as Apalachicola Bay.   It also helps justify why we ate so many raw oysters the night before; the truth is, all those live creatures we ate were raised in a culinary wonderland for marine life.  Unfortunately for the creatures, their culinary wonderland also makes them some of the best tasting seafood the world has to offer.

Designated in 1979, the ANERR is part of the National Estuarine Research Reserves System, a network of 27 areas designated by the National Oceanic and Atmospheric Administration representing different biogeographic regions of the United States that are protected for long-term research, water-quality monitoring, education and coastal stewardship.

The basic lesson is:  what happens upstream effects what happens downstream. Apalachicola receives waters from a drainage basin which extends into Alabama and Georgia. Thus, the Bay is susceptible to factors affecting the Chattahoochee and the Flint River systems as well as those affecting Florida’s Apalachicola River. This creates an estuary, where fresh and salt water mix, ideally suited to serve as a nursery where some 186 species of fish, oysters, clams, shrimp and crabs spend their early days.  The rich nutrients found in the river drainage basin which boasts more than 1300 species of plants–103 of which have been identified as threatened or endangered—make the sea babies grow quickly into healthy and ultimately tasty catches, creating a bounty for local fishermen and shellfish harvesters.

More than 95 percent of all species harvested commercially and 85 percent of all species harvested recreationally in the Gulf of Mexico, including shrimp, blue crab, stone crab
and finfish come from these waters.  To protect the marine and plant life, the ANERR much watchdog all the activities upstream to prevent destruction of the delicate eco-systems.  Aside from pollution control, the ANERR must fight against the river cities’ demand to take more and more water out of the river, particularly in drought years.

The river flow is variable annually and seasonally and determines salinities in the bay.  Low river flow means higher salinities resulting in changes in species distribution and reduction in the commercial harvest.

Our trip to Franklin County made us advocates of the essential ecological preservation work that so many individuals are involved with in the area.  Catching a glimpse into the life of the fish and oyster mongerers will leave us ever-appreciative of what it takes to cultivate some of our favorite culinary delicacies.    And we are particularly envious of the naturalists who trade the office for a boat decks in their workdays as eco-tourism guides. 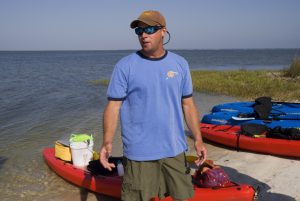 Proprietor Justin McMillan, along with a dedicated and knowledgeable staff at Journeys of St. George Island is among more than a dozen outfitters providing ecotours of the area.  The shallow areas of Apalachicola Bay and its many small creeks and tributaries are perfect for excursions by canoe and kayak providing opportunities for viewing local wildlife.  More than 50 species of mammals make their homes here, including the threatened Florida black bear, the endangered West Indian Manatee and the Indiana and gray bats.  Additionally, the river and bay watershed is one of the most important bird habitats in the southeastern U.S.

For 20 years, Journeys has provided guided kayak, canoe and boat tours ranging from shelling tours to the outer barrier islands, informative historical tours of the estuarine system, dolphin encounter cruises and river, bird watching and sunset tours.  Journeys fishing adventures include inshore bay trips, flats and tarpon fishing and deep sea charters.   In addition, they are a rental resource for sailboats, powerboats, kayaks, stand-up paddleboards and canoes.  The Journeys team delights in every opportunity to educate children about the local environment, and they specialize in provide many recreational adventures just for kids.  A three hour kid’s fishing adventure is offered, and five-day environmental camps for kids are run several times during summer season.