When you visit Napa Valley, make some room on your palette to taste not only the fabulous wines of Charbay, but also the  ports, vodkas, rums, whiskey, tequila, and  liqueurs.
The Karakasevic family makes everything hands on and it shows in the quality of everything they bottle.   A trip to “The Still on the Hill” on Spring Mountain above St. Helena is not to miss.  You’re guaranteed to leave a life-long fan of both the family spirit and of course, the spirits that are produced in an artisan tradition that has now been passed down to a 13th generation.

CHARBAY Winery & Distillery remains an independent family business owned by Miles and Susan .  Marko is Generation XIII to carry on the family’s European heritage of fermenting and distilling.  He and his wife, Jenni, now work hand in hand with his parents to carry on the inherited traditions. 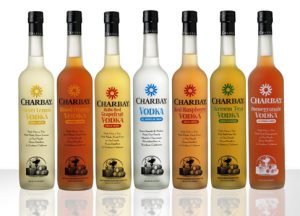 Born in old Yugoslavia, Miles Karakasevic apprenticed in the tradition followed by the Karakasevic family since the 1750’s. Following in their footsteps, learning the secrets of his forefathers, he eventually became certified as a Master Distiller–a title earned in the Old Country by equaling or bettering the work of another Master. Along the way, Miles studied Enology and Viticulture at the University of Belgrade and in Germany. Immigrating to the New World in 1962, Miles first stopped in Canada and then Michigan, where he met his wife Susan.  The couple moved to in California in 1970, and in 1972 purchased the 17-acre property on Spring Mountain in Napa Valley’s St. Helena that now is home for the family as well as for Charbay.  In the following years, Miles worked as an assistant winemaker with some of the region’s best wineries   Longing to distill, he convinced a client to import an Alambic Pot Still from Cognac and started two distilleries in Mendocino County.

Meanwhile, Susan studied the marketing aspects of the wine business.  In 1983, Miles and Susan were ready to start making their own wines and brandy and built their own winery and distillery right beside the family home, and they haven’t stopped since. Charbay continues to be noted for its excellent brandy, named by Robb Report: Best of the Best, Spirits 2011.  In 1998, Marko conceived the idea of Charbay’s whole-fruit flavored vodka program which involves Marko himself making the ‘Fresh Fruit Loop’ driving six hours south to meet Charbay’s growers and load up the bins of whole Blood Oranges and Meyer Lemons… then on to the next stop for  freshly picked and pressed California pomegranate juice.   The reason why Charbay Vodkas taste like the real fruit?: “A.S.E.T.” a nickname for the extraction method that Marko and Miles use for the Charbay Vodkas. It stands for “Ancient Serbian Extraction Technique.”   It means the whole fresh fruit is picked at the peak of ripeness and zoomed to the distillery, shredded whole, extracted and combined with Charbay’s award winning clear vodka.   Marko also played the lead in introducing the newest spirit to be added to the list of Charbay’s distilled treasures, Charbay Tequila Blanco. Book a reservation at www.charbay.com before heading up the hill to enjoy a tasting and reserve a picnic table to enjoy a fresh cigar along with whatever wine or spirit you choose to savor.