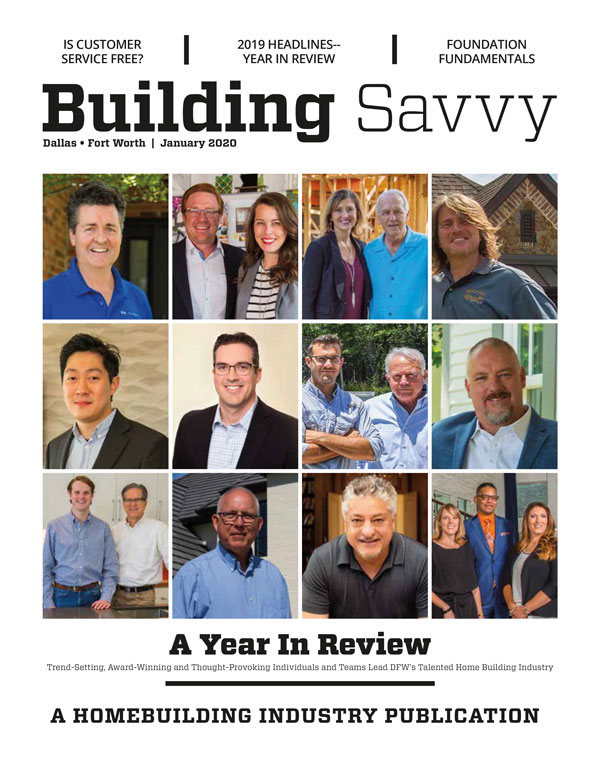 Each January starts a new editorial calendar for our Focus Sections. Throughout the year we explore new schools of thought and the latest products as we embark on the journey that starts with the foundation. Next is the framing, followed by a style report on exterior design. Then it’s on to a performance series beginning with window and door performance, then insulation and mechanical systems. The hot trends and new products for surfaces, kitchens, baths, and outdoor spaces come next before we wrap up another year with updates on home technology and finishing touches.

A basic understanding of foundation engineering and what’s entailed in the mixing and pouring process to lay a concrete slab foundation can help a savvy builder keep costs down and improve the strength and resilience of the foundation–not to mention avoid potential major problems down the road.  This review of foundation fundamentals may also provide talking points to help your buyer gain a better understanding of the process and instill trust in you. When they sign the building contract, they are after all, placing you in charge of one of the most important responsibilities in building their home—doing your best to assure that it is built on a solid and lasting foundation.

The one-pour design process is how monolithic slabs earned their name.  Now, one of the most common types of foundations, slabs are cast in place as one single component, including a thickened perimeter that serves as a footing.  Slab foundations are the most economical type of foundation to build, but their cost increases when there is a need to build a home’s foundation deeper in the ground.  It becomes close to the same cost or even more affordable to build a basement in northern states where the frost line dictates a deeper foundation.

Proper site preparation and reinforcement of the concrete

The soil beneath a slab foundation must be compacted and not contain any organic matter. Building codes dictate the depth and width of the trench dug around the perimeter of the slab so that a thickened edge of concrete will serve as the foundation footing.  Next, compacted gravel is spread over the prepared soil before a woven wire mesh is laid over the top as the final reinforcement for the slab.

According the Journal of Light Construction, a typical concrete batch, by volume, contains roughly 10% cement, 30% sand, 40% gravel and 20% water and air.  Your concrete supplier’s job is to provide good quality cement, sand, and gravel. The goal is for about 70% of the content to be made up of aggregate with just enough cement paste to glue the mix together.  Normal shrinkage happens when water evaporates out of the cement paste, so the rule of thumb would say the more stone and sand there is, the less overall shrinkage and potential cracking there will be. Aggregate is not only stronger than cement, it’s also cheaper.

An Ounce of Prevention with Air and Other Additives

Some amount of air entrainment is often introduced into the mix for long-term freeze/thaw resistance. When the concrete sets up and hardens, the microscopic air bubbles give excess water in the concrete space to expand when it freezes.  Microcapsules are showing potential promise as another potential concrete mix additive. Researchers at the University of Cambridge are experimenting with the use of microencapsulation technologies developed by Dolomite Microfluidics. “Healing” agents– such as minerals, epoxy or polyurethane – are added inside of the microcapsules and added to the concrete mix to self-repair the small cracks which develop over time. As cracks begin to form, they rupture the microcapsules, releasing their payload and stabilizing the material.

Water:  A Happy Medium is the Goal

Besides your concrete supplier, your site supervisor also plays a key role in the ultimate success of your foundation with the ability to determine and control the amount of water added to the mix.  The cement and water form a paste and react together chemically via the process referred to as “hydration” and bind with the sand and gravel to make concrete. Your engineer would prefer to see stiff concrete with as little water added as possible, but the workers onsite with the shovels would prefer concrete with more moisture content so that it flows naturally. Somewhere in between is a happy medium–wet enough to be workable but dry enough to result in good hard concrete.

If you pour a stiff mix, the concrete should be watertight.  Vapor permeability will be reduced by a stiff concrete mix, but that won’t guarantee that it’s totally resistant to ground moisture problems.  This is where the expertise of your engineer comes into play. Proper grading, surface drainage, waterproofing, and perimeter drainage are vital considerations that must be made upfront in the process to prevent ground moisture from moving through the foundation.  A slab or partial basement walls must also predict the horizontal trust tendency of the earth being retained around them. Environmental factors including heavy rains or lack of rain can cause changes in the volume of the surrounding soils; expansive clay soils, which can expand as much as six to eight inches, are most notorious for this.  Swelling of the soil, occurring when moisture content increases, or shrinkage when water content declines can disrupt even the most carefully laid foundation. Tree roots extending under a foundation can also withdraw enough moisture to cause shrinkage.

When the Site Calls for a Different Foundation Solution

Sometimes where the site or soil conditions call for a special type of foundation, a buyer may decide the view or particular location is worth the extra cost it’s going to take to put the needed specialty foundation in place.  Obviously, the extra prep work, increased foundation cost and higher engineering costs are going to need to be analyzed upfront, ideally before any final decision is made to purchase a particular building lot.

Highly expansive soils will either require very stiff and strong soil supported slab foundations or may dictate that the entire floor structure is carried on a pier system.  This system requires a void space beneath all grade beams and slabs of the foundation. The structure rests instead on a series of piers anchored at the established depth determined to remain stable even though the near surface soils move around it.  All soil supported elements such as steps, patios, sidewalks or driveway slabs are separated from the primary foundation.

Soils with good shear strength but having a problem with large settlements or differential settlements under heavy load, or soils with low shear strength where there is no hard layer of soil at reasonable depth, may require a floating foundation.   This type of foundation, also called a balancing raft, is constructed by excavating the soil in such a way that the weight of the structure built on the soil is nearly equal to the total weight of the soil excavated from the ground.

An unlikely quote coming from the country music legend David Allan Coe is one that every home builder must agree with:   “It is not the beauty of a building you should look at; it is the construction of the foundation that will stand the test of time.”  Choosing the right team of experts to advise you, performing a complete site analysis and thorough soil testing, and closely supervising the essential first stage of construction can make or break you!